From Trail horses to Dressage and from Western Pleasure to Jumping what ever the end goal CRLLC loves them all.  Whether starting a youngster, re-schooling an ex – race horse, or furthering the training of a broke horse Kalsem Training loves to Train. 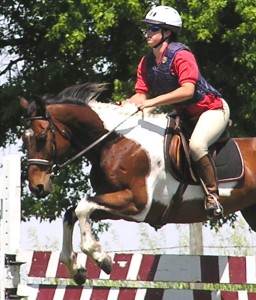 Just a very few horses that CRLLC have had are pictured here.

Isa the Friesian is on the right was a lovely little dressage horse and Joy the APHA is on the left was a fun little hunt horse.  (both being shown by CRLLC Students)

OH for the love of a pony.

Our ponies are great.  Ben, the buckskin and a Morgan cross is in both pictures left.  He is a legend around here (if only in his own mind)!  He has helped teach MANY kids to ride and jump.  Now MY kids get a turn.  My oldest got to show him in 2009 at Iowa Games winning a Silver in Dressage AND Jumping.  In Fall of 2019 Ben went to pony heaven. RIP my boy.

Then the very next weekend he got to be a 4H pony and helped win several blue ribbons there too.  In 2010 my number two daughter will get to move up to Ben (off W. shown below left) and my oldest will have to go on to an other horse.  (Which horse at this time is undecided, if you ask her it will be Bounder, her trainer, Erin Reece has not yet spoken to that.) Bounder

Dani did get to ride Bounder some but in 2012 He moved on to a fantastic young rider. 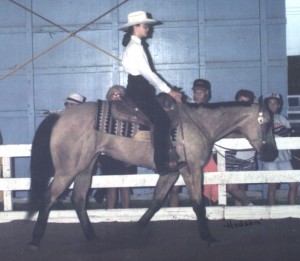 One of my all time favorite horses is Bucky, the AQHA mare, she came to me as a western pleasure training horse and started her career as a youth horse.

Bucky ended up with a successful career  in both the western pleasure and Eventing.  Shown exclusively by “her girls” who are both very successful in the equine industry.  Bucky, was not only a perfect show horse but also gave a ton of lessons and was very instrumental in teaching a load of kids to ride after her show career.  Shown right with the English tack and with the younger sister at Iowa Games and left with the older sister, western at Iowa State Fair.  Bucky left us for heaven in her mid 20’s.

My training history would be wholly incomplete with out the crossbreds.   Drafts crossed on Thoroughbreds, Paints, Arabs and Morgans have all been popular with us. 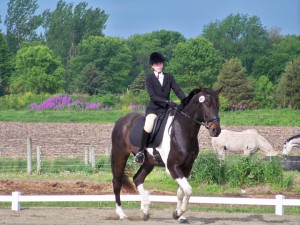 Bounder shown on the left  is just a blast, he is out of a TB mare and a Percheron x APHA stallion.  He does everything for fun he is happy to work and play.  Bounder likes to do lessons and likes to go out hacking, he likes to hunt and he just likes to go.  He is like a lap dog except he doesn’t bark. He is pictured above with Erin jumping and here with a favorite student.  In 2019 Bounder went to gallop in heaven.

percheron, 1/8 paint 3/8 Thoroughbred.  Baby loves to jump and is very cat like, not relaxed emotionally enough to be good at dressage but great as a jumper and field hunter. 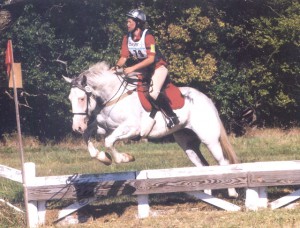 God Father is on the right and is 1/2 APHA 1/2 Shire.  God Father did Eventing and was also a lovely Field Hunter.

Of course last but never least the Thoroughbreds. 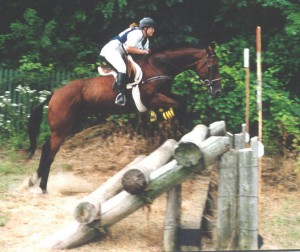 Kalsem training often takes donations of horses and some of these horses were donations and some were purchased.  All are fabulous!

If you were paying attention to what I was saying you will remember I said my first eventing experience was because of a bet.  The bet was I couldn’t get this off-track horse through the Iowa Games show. The owner bet me half ownership if we won and I had to give free training if we didn’t.  SO after Iowa Games 1995 Junk Yard Dog was half mine!  The picture left was in 1996 at our first Training Level Event.  He retired locally and in his early 20’s he went to gallop in heaven.

Then there in Jinxy.  (left) He is one special horse, owned and shown currently by one of my favorite gals.  In spring 2010 they went prelim at Full Gallop Horse Trial. 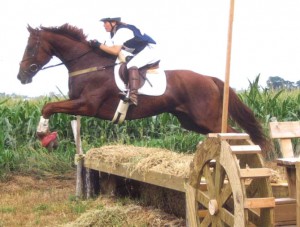 Jack and Quiz .  Jack (above right) is currently being schooled on his way to

becoming an eventer and Quiz (below right) was going Training level with his girl but sadly he left us too soon.

The bottom picture is Reggie (the princess) he came to us from a friend and is now owned and shown by my daughters’ Trainer Erin Reece.

Blade was a sweet boy and Dani and I both enjoyed showing him.

And of course George! TB’s make use smile.